COVID-19: Be advised that our SpraymanUK website is operating as normal, however due to Government guidelines our trade counters will now be closed until further notice. We are able to operate a 'Click & Collect' service. Upon collection you will need to present the credit/debit card used to order goods, along with relevant I.D. Please call 01543 496289 prior to collection. For Next Day delivery service, we will send the goods 'Next Day' however none of the the courier companies are 100% guarantying this service at the moment. 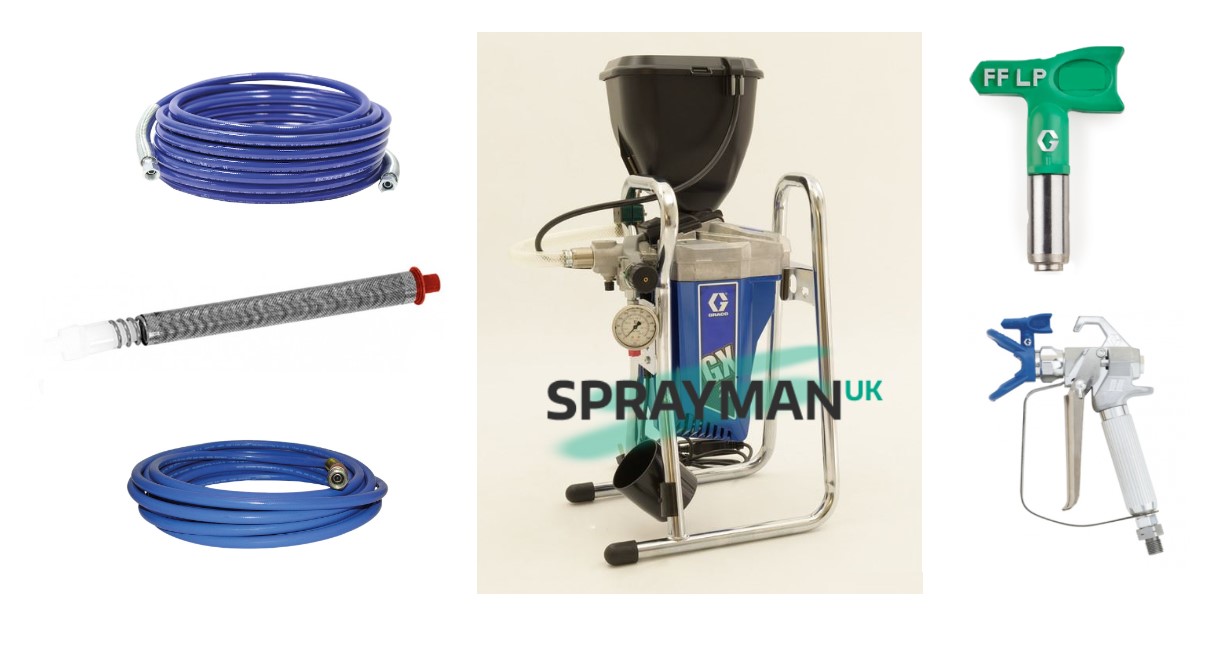 Delivery normally within One Working Week.

If you like the idea of a Graco GX21 with the GXFF Gravity Hopper, but only want to spray emulsions, then take a look at the GX21 Deluxe Gravity Hopper SprayerSprayman Standard GX21 Hopper Airless Sprayer

Scroll for down for product pictures.

Question:
What do you get if you cross a GX21 with a
GXFF?

Answer:
A 'GX21FF' and the best GX sprayer that you cannot buy.

Well, that is until now.

It's so good, we just had to invent it!

OK, we haven't mated a GX21 with a GXFF. What we have done is taken a Graco GX21 sprayer and added to it our SpraymanUK GX Gravity Hopper kit, together with an extra paint hose, filter and FFLP Spray Tip.

Which gives you the greater speed and power of the GX21 together with the Gravity Hopper and Fine Finish capabilities of the GXFF.

So why are we doing this?

Because here at SpraymanUK, we are always being asked which is the best machine; the GX21 or the GXFF?

Technically between the two GX sprayers, the GX21 is rated for use with to a .021" tip and the GXFF a .019". So the GX21 has more power over the GXFF to spray walls and ceilings. Whereas the GXFF is primarily intended to spray smaller areas such as wood trim and doors. Additionally the paint hose supplied with the GXFF is 3/16" bore so totally unsuitable for spraying emulsion paints. So by default the GX21 has much more flexibility.

So for spraying walls & ceilings with its bigger tip and a siphon pick up the GX21 is best. But painters love the convenience of the GXFF's gravity hopper. Also with the GXFF's hopper (so no siphon hose) and smaller paint hose, less paint is needed to initially fill the hose.

So if you take a standard GX21 and add to it our SpraymanUK GX Gravity Hopper conversion kit, along with the GXFF smaller bore 7.5-metre airless paint hose, an additional Fine Finish Low Pressure (FFLP) 310 spray tip and a 100 mesh fine finish gun filter; you end up with a GX21FF.

The package also retains all the standard accessories included in the original GX21 sprayer package.  So you have the longer 15 M (1/4" bore) paint hose and a PAA515 Airless tip as well as retaining the functionality of using the GX21's syphon pickup hose when needed.

So great for emulsions and for spraying woodwork and doors etc. So now with the SpraymanUK GX21FF you have the perfect Airless Sprayer for Domestic Painters & Decorators.The best of both worlds.

That this hopper package comprises of a standard Graco GX21 Airless Sprayer. Part Number 17H218. Supplied in its original unopened packaging as originally supplied to us by Graco Europe. To which we supply a modified Graco hopper kit, along with all the additional accessories as listed. Therefore the machine is still an unmodified 17H218. So Graco's full warranty is unaffected and guaranteed by Graco.

All YOU need to do is add paint! 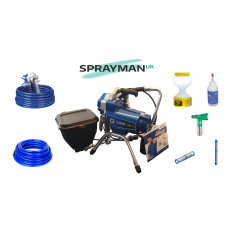 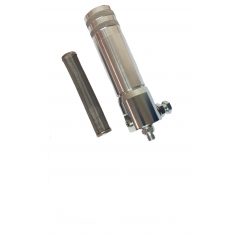